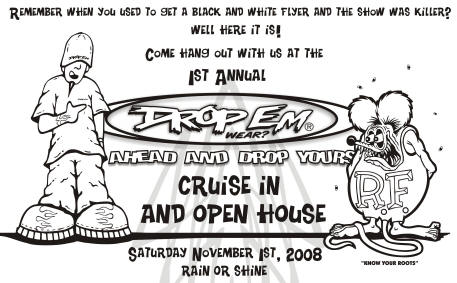 The Drop Em Wear Show was held on November 1st of 2008.  This was Drop 'Em Wear's first car show that they have ever held on their own.  As a matter of fact, the show was actually held on their property where all of the Drop 'Em Shirts, decals, toboggan’s, key chains, you name it, are made!   was the announcer and had the crowd entertained throughout the day.  This show was kind of small, given that it was the first one, but there were some killer custom cars and minitrucks at the show (as you can see below), but this show also featured some special events.  For instance, the bean-bag-toss competition lasted for at least 2 hours, then there was the hot-dog eating competition.  How often do you really get to see one of those? LOL!  There was also a hot-wing eat-off and a disgusting milk-chugging competition.  That was pretty much the most disgusting thing I have ever seen, but it was hilarious at the same time!

I was proud to be a participant in the show.  Very rarely do you go to a custom car, or custom minitruck show and not see the Drop 'Em Wear van.  They really work hard to bring cool products to the shows and are incredibly nice people, so it felt good to show my support for their efforts at their first show.

As it turns out, my 96 Impala SS took "Best Of Show Car!"  I was very happy with the incredibly unique trophy that I received, and also the Drop 'Em Wear gift certificate!  Thanks for the show to all of the Drop 'Em Wear employees!

The drop em wear show was awesome!-Click here to return to our car shows Page