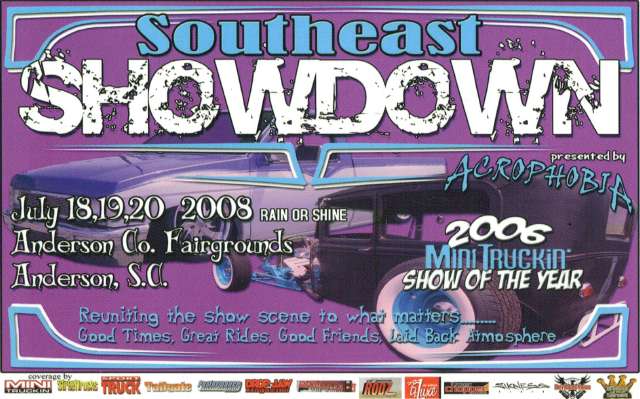 The lifted trucks at Southeast Showdown 08 were the real deal "monster trucks!"  The last two pics are of the biggest domestic truck that I have ever seen!  Its an F-250 with about 6 feet of lift!  They parked a lowered f150 underneath that thing.  Several of the trucks were built solely by their owners, most featured killer paint schemes, and all had some serious tires under them!  My favorite would have to be the orange suburban below.  I should have gotten more pics of it, but there was a lot going on, so I must have been distracted! This lifted Suburban had it all.  The paint featured some killer flames, it had an impressive, and usable lift, the tires were huge too.  The engine was dressed up and the interior had been modified as well.  These trucks were all very cool though.

Please look through the pictures below to see some of the coolest rides at Acrophobia's Southeast Showdown Custom Car, Truck, and Bike Show