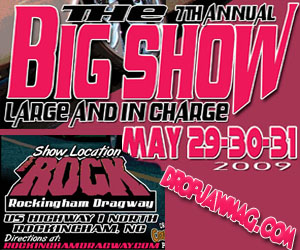 Big Show 09 in Rockingham, NC was bigger than ever before!  If I'm not mistaken, over 700 custom street cars and custom trucks were on display. I attended with my car club, Pebble Pushers, and brought my 96 Impala SS to show. The weather was ideal, except that it was "asphalt melting hot!"

After being sun-burned, I learned that I always need to take a shelter, or pop-up tent of some sort, to create some shade for myself. The entire show was held at the Rockingham Dragway, aka "The Rock," in Rockingham North Carolina.

The show featured virtually every genre of customized vehicles.  The minitrucks were more incredible than ever before with all of the mods that the owners applied to their minitrucks.  Most of the import cars featured the latest in electronic accessories.  The Donks had bigger wheels than ever before. Last but not least, the full-size cars and trucks were heavily modified too!

Except for the Donks, virtually every vehicle (both car and truck) were rolling on custom wheels and adjustable suspension.  I always find it interesting to see the different ways people alter their suspension whether it be with hydraulics, air bags, or lowering springs.  You can easily see who best laid out their suspension plans and put them into action.  I can't say that every lowered car or truck out there had properly installed their suspension, but for the most part they all were done very nicely.

As with most cars and trucks at custom car shows, there were custom sound systems in abundance!  Some had walls of subwoofers behind their seats, some had custom fiberglass structures that looked awesome, while some vehicles just had drop-in sub-woofer boxes, but most looked good.

At a car show like this, you will hear, and feel, music all day long.  It was cool to hear all of the popular songs, rap, metal, etc.  However, my favorite sound to hear was a toss up between the frames dragging under the minitrucks that were sliding by with no air in their bags, or the exhaust up some of the modified engines roaming down the aisles.

The show was well organized and pretty much stuck to their time schedule that they handed out at registration.  This year's show had drive-through judging, and a killer night show.  I have pics of the night show, but they are a little explicit so if you want to see those you need to email me!  I'll see there next year!